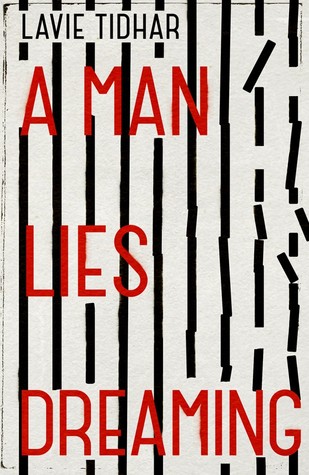 Deep in the heart of history’s most infamous concentration camp, a man lies dreaming. His name is Shomer, and before the war he was a pulp fiction author. Now, to escape the brutal reality of life in Auschwitz, Shomer spends his nights imagining another world – a world where a disgraced former dictator now known only as Wolf ekes out a miserable existence as a low-rent PI in London’s grimiest streets.

An extraordinary story of revenge and redemption, A Man Lies Dreaming is the unforgettable testament to the power of imagination.

It’s my belief that, when you’re seeing harm done, the greatest priority is to do your part in making redress to those harmed.

In the wake of the controversy surrounding a Nazi romance (it’s predictably offensive in pretty much all the ways you can imagine: ‘redeeming’ a Nazi commander, rape-as-romance and all), I remembered that I had never properly reviewed A Man Lies Dreaming, and that’s really a shame. It’s a very unique book, and Mahvesh Murad agrees with me, exceptional and ambitious in a lot of ways. So this is what I think of it.

Spoilers: I think you should get a copy. Trigger warnings for discussions of, well… the Holocaust. The book also contains explicit rape and sexualized violence.

This is alternate history, imagining Adolf Hitler as an impoverished private investigator – stripped of his power, forced to live on little money in London.

The framing narrative is thus: a Jewish man, dying in a concentration camp, comforts himself by imagining Hitler as the above. We have two layers running side by side: the inhuman brutality of the camp and alternative Hitler (alias Wolf) investigating a missing person case in London. It’s a risky, ambitious idea of course – not many writers can successfully pull off writing Hitler as a protagonist. There’s always the risk of making him sympathetic (and so being really, really deeply offensive) or sanitizing him (again, offensive and ahistorical). Tidhar, though, is an exceptional talent. He pulls off the feat of making Wolf an engaging character that we are, at the same time, very much meant to loathe.

This is a book where a Jewish woman literally pisses on Hitler and calls him a whore.

It’s incredibly politically subversive, and extremely – unflinchingly – in its explicitness, in both the framing story and the imagined life of Hitler-as-PI. Of course there are times when Wolf/Hitler faces off against antagonists that make him look slightly less repugnant in comparison, but it’s a matter of power: they are often his former subordinates and allies, and retain the power to exercise monstrosity, whereas he is stripped of everything and must toil away in poverty. Not infrequently he’s beaten within an inch of his life, and there’s a voyeuristic satisfaction in that even though usually we are supposed to feel bad for the noir detective being ‘unfairly’ beaten up. But here it is simultaneously monster against monster, and – from the viewpoint of real-world history, the viewpoint of the Jewish writer imagining all this – supreme justice.

It absolutely is a book like no other. Please don’t miss it.